Get a weather forecast from the Finnish Meteorological Institute.

It provides forecasts from all over the world in English, Swedish and Finnish language. The forecasts are most precise for Finland and surrounding countries. 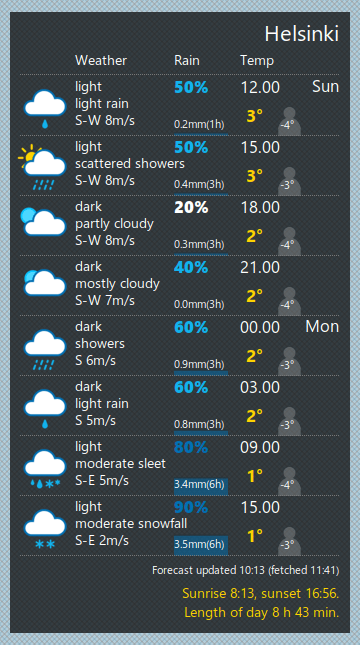 The scripts in this repository will

There's no installation as such. Clone the repository or download the zip (also from here) to a folder of your choice. Keep in mind that all files need to stay together.

Because I am unsure about licensing issues, weather icons are not included. Please run the script ./geticons.sh from the repo's base directory; this will download the icons from the website, then convert and save them to the appropriate folders to become usable by the script.
The icons are in vector fromat and need to be converted to PNG for conky to be able to use them. For that, you need imagemagick's convert command.

Note: the path to the configuratioon file is relative to the repository's base directory where startconky is located! 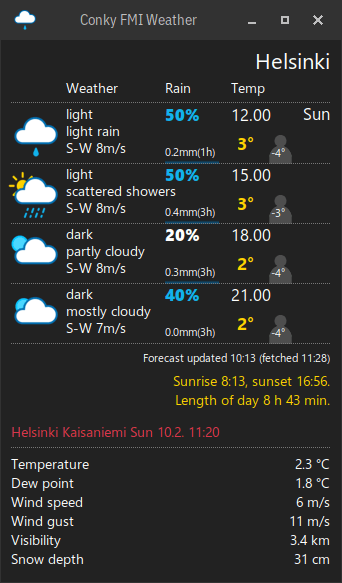 ./startconky will start a conky that executes a shell script.
The shell script looks at your configurations, parses the web page, and produces conky-readable output.
The conky then reads that output, parses it according to conky rules, and displays it.
This process is repeated every 10 minutes or so.

If you don't know conky, check this out first.
This README cannot cover all conky-related topics relevant to this repository.

If you want to run the conky on-demand in its own window, instead of the desktop, you can try the --toggle or --reload option:

In this case the path to the configuration file (always relative to the repositories base directory whre startconky is located!) becomes the second argument to the startconky command.

Some configurations are provided. If you want to modify them, pease copy them to the myconfig folder first, or create a new file in that directory.
Unspecified or commented variables continue to use default values.
The syntax is key = value. Spaces around = are optional, both single and double quotes around values are possible.

Most configuration happens inside the shell script (and your personal configuration), but it is still likely that you will need to edit the conky configs conky-itlv.lua or conky-itlv-toggle.lua. The recommended method is to copy the file to the myconfig folder while keeping its name intact, and edit that copy (the startconky script will look there first).

The startconky command can always be called with an absolute path (see Quickstart).

If you choose to clone with git, and keep all modifications to the myconfig folder, you can update the repository with

issued from the repository's base directory.

If you still experience problems:

There's more explanation in all files.

Why not use one of the existing, much better looking Weather Conkys out there?

I am not a conky desktop widget designer. I am aware that there are much better-looking weather conkys out there.

In fact, I wouldn't recommend using this if you don't live in Northern Europe.

The reason I maintain this repository is because I use it, and the reason I use it is because I believe that a locally retrieved weather forecast is always superior to one retrieved from a large international website somewhere halfway around the globe.

I am trying as far as possible to mirror the website's way of displaying information, except for turning it 90 degrees. It might differ from what most people accept as a simple weather forecast design, but it has more granularity and more objectivity (except for the seemingly ubiquitous "Feels Like" temperature). I do not want to depend solely on what some website considers the best way to describe the weather for the whole day; on my weather conky I can see much more data and apply my own interpretation.

Some words about conky

"conky is a strange beast" i read somewhere. It can do nice things to your desktop and, used properly, it's extremely lightweight. But sometimes it behaves unexpectedly. Usually, once you have it set up, it runs stable, but the tweaking can be nerve-wrecking.

Changing the font will most probably mess up the layout, but you can fix most of it by adjusting vertical offset in your configuration (lineheight).

Everything has been tested, but always something unpredictable can happen. If you encounter an error and want to help develop this script, please write to
this forum thread or this finnish forum thread or raise an issue.
Thanks!

Happy customizing and don't forget to look out the window sometimes!